Odd name. Great Race. When I first heard of this race, my initial thought was... that's a silly name. I can't see myself ever doing that one. Eventually I saw the route map. And the fact there were only 75 entries per year... it is now a firm favourite of mine, so it is a shame that this was the last edition of the race.
Sadly one half of the organising couple - Steve Cliff - passed away from MND earlier this year. His Wife Wynn conceded that a final race- along with Anniversary Waltz, was indeed fitting, and raised a stupendous amount of cash for charity in the process. However, in its current form it is now being wound down.

The route starts from Stair, where you aren't given any warm up before the climb to Causey Pike, which pretty much sets the scene for the rest of the race. As has been the case for the past 3 years that I have done this race, the weather was beautiful and clear, the sun was shining and sunlotion and a hat were the definite order of the day. (I used p20 lotion- doesn't seem to wash off with sweat, and despite wearing a vest for the first time this year, I came back with no sunburn... it really is good stuff).

The last couple of weeks I've been struggling a bit with a flu/cold thing which has left me exhausted. I've done nowhere near enough miles in training, my feet are soft, and I'm generally a bit weaker than I was for previous versions of Teenager. Going into it I figured that a 3:20 would be amazingly good going, considering the 3:11 and 3:12 of yesteryear. A nice day out in the hills then, I was thinking.
Unfortunately when the starter whistle goes and everyone heaves off into the distance, you don't think that, and I went off like a bull in a china shop, knowing that without the training the whole thing was going to hurt... so I might as well get in some hard going before things really ended up going pearshaped. 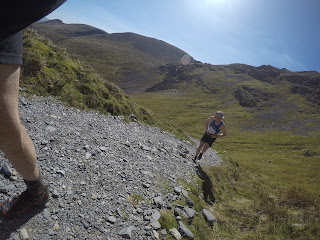 Up Causey Pike we went, and it was great to see that Simon Harding from Macc Harriers was out on the hill again after a bit of a break, so we had a quick chat on the way up... although I was a little faster than him at this stage, I was certain that I'd see him again at some point on the course.
Chris Webb was a little ahead of me on the climb, but down t'other side he stuck to the path and I careered through the rough stuff and gained the time back, gradually catching him, so that eventually we ran together, with Scoffer over to Grasmoor. The sun was high, and the work was hard, but I was pretty happy with where I was in the field, especially as I was catching Adam Perry up (and not through speed...more through different route choice). 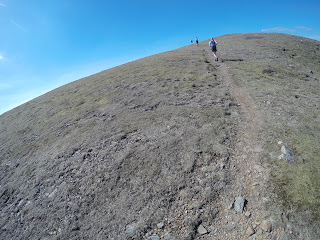 The views from Grasmoor were amazing, though we didn't really get much of a chance to enjoy them, as we clattered off down and around to Whiteless Pike.

My big toes were beginning to hurt by this stage as the shoes I was wearing were NOT holding my feet still... yes, it seems that Inov8 have changed their sole units and uppers AGAIN, but more of that at a later date. Suffice to say the design (whether they say it has changed or not) doesn't hold my foot in place any more, so I was smashing my toes against the front of the shoe on all the descents. Cue Whiteless Pike, the biggest, gnarliest descent of the race. My quads were already a bit trashed, my toes were sore and my heels were developing hotspots. Not massively conducive to going downhill at speed. Looking at comparisons, I was more than a minute slower than my previous races just on that section. Strength is certainly down, and my descending ability has taken a turn for the worse. It isn't the head that is the problem, it is lack of strength... so I know where to start training again. 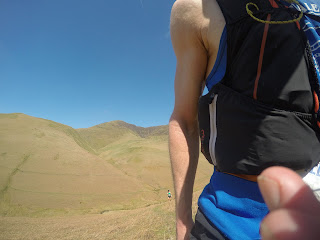 Through the stream at the bottom and up the pass, and the string between me, Chris, Scoffer and Adam had snapped, and off they went up High Snockrigg at a pace while I lagged behind. Classically the worst point of my race, I felt like I was going ok, even though I wasn't keeping pace with them, though times don't lie, and that was my slowest ascent of that hill ever, (which may have been why I felt so good!).

I hit the high point of the hill with Konrad on my tail. We ran together for all of 2 minutes before parting ways for differing ascents of Robinson. I took the Righthand line, he took the Left. Aha! Finally we'll workout which of the lines is faster. I ran as far as possible up the incline before starting to walk, and put my head down and got stuck in... up and up (it's a blinking big hill... especially compared to the stuff we have in Derbyshire). Up towards the top and a Bottle of water Toting Rhys F-R. So... which was the fastest line? Neither. We both reached Rhys within about 5 seconds of each other, absolutely nothing in it. 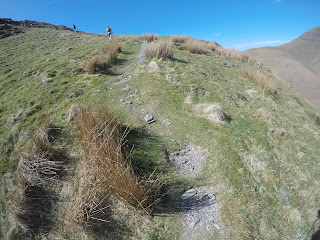 Joining the Anniversary Waltz-ers is always fun because you're not sure if you're running at your pace, at their pace, or faster or slower than normal... Halfway down Robinson, with my feet sliding all over the place I HAD to stop and try to tighten my shoes. Konrad zoomed off into the distance as I sat there pulling on shoe laces, getting slightly more tightness around my feet.
I caught back up with the waltzers that were passing me, but Konrad was gone into the distance.
Up onto Hindscarth, eating more shotblokz than perhaps is healthy, then the descent and ascent to Dalehead and the most amazing view of the Lake District... where you can see the entire ridge that you're about to run down.

I was seriously slowing down by this point, as was my headspace... I took a rubbish line off Dale Head, going far too far to the right and losing a load of time which really didn't do me much good. (I must look at that line one day!) As we hit the climb to HighSpy who should appear, but Simon Harding. Aha! I knew he would catch me up at some point, I was quite glad that it was this far into the race though... Simon Ripon on the Waltz was also there, and we were fairly well matched for the entire ridge to the end. To be fair it was mainly me going "Im exhausted" and him going "come on Tim - dyou want some food?".
Joss was up on top of High Spy, so it was good to see him out on the hills cheering us on. The rest of the ridge to Catbells was pretty much me following a trail of loads of runners, trying not to fall over and desperately trying to get the end without heat exhaustion. A gel went down, along with the rest of the shotblokz. My feet hurt, my legs felt battered, hamstrings were trying to cramp at every other step... so this was really a bit of crisis management for about 6k or so. All good practice for Jura I suppose.
It was my slowest descent to the finish ever, and I crossed the line in 3:19. Just about where I hoped I would be given the best scenario for my current fitness. 14th overall, which I was a little surprised at. 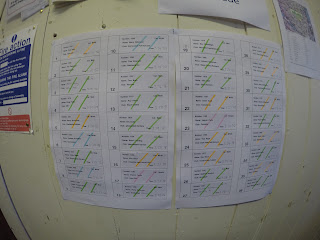 I haven't felt that bad at the end of a race for quite some time. A combination of lack of fitness, the heat and getting over a cold probably all contributed to the fact I was walking around like a zombie and just wanted to sit/lie down for a very long time. Still, with a few decent weeks of work I might be a little more up to speed for the Old County Tops, and then Jura. We shall see.