Not raced since June? Nope. Not really. However, the Hodgson Brothers Mountain Relay is always one which I will turn up to for the club if needed, unless injured, of course.
Again this year I was on leg 4, I think it must be the 5th time I've done that leg now. I suppose I should count the coasters.

This year I was heading out on the course with Chris Webb- we have forgiven each other for the Ramsay Round earlier this year, and were looking forward to having a bit of a blast around what is essentially an AM in the Lakes.
We had a basic understanding of about how long the other guys on the legs 1-3 would go, and didn't want to get to the start of the Leg too early. Leg 1 took a little longer than planned because of a bit of an injury, however, that got taken into account and we started jogging up to the start from the finish field when we heard that Leg 2 had finished.

Easy jog out and then it was a matter of about 10 mins wait before Mark and Mark came ploughing down the hill and into the changeover area.
It was damn breezy out there, with a significant amount of buffeting even at low levels. Despite that, we opted for the vest and no under-option figuring we'd be traveling fast enough to keep warm. And that we did.

There was an option to take a straight line instead of the path at one point, but we kept on the line that I've done for the past few years, overtaking a few teams on the way. Near the top of Fairfield we took a slight deviation to the obvious, and that seemed to net us a place or 2 as well.
Across the tops it was really blowy so we had to be pretty careful about where we were running, and not getting blown off the tops. Chris was strong on the ups and I had to really work hard to keep up. Downhill I managed to retain some semblance of ability and made him work hard to keep up with me.

Over Cofa Pike instead of the sneaky line that goes under... I must go and recce that one day, and then up to St Sunday. My line off Sunday was a little off, though we didn't lose too much time because of that, and then a fast downhill to the end, coming in at 1:15:52. My best time for the leg by about 5 mins, which was pretty decent. I reckon we can take another 3-4 mins off that on a good day with some intelligent reccying.
Still - 17th overall on the leg and 34th out of 70 team- happy with that. 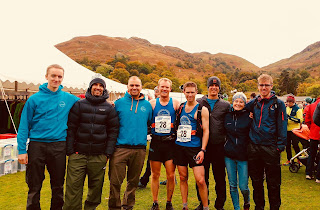