Chris and I were sitting the pub discussing his Paddy Buckley round back in February when he mentioned he didn't have a partner for the OCT this year. I don't remember actually saying "yes", but there I was, up at 4:15am having breakfast, waiting to be picked up for a dash to the Langdales and back in a day.
Despite being relatively nice and sunny in Glossop, true to form, as soon as we stepped out of the car in the Dungeon Ghyll carpark, it began to rain. Not only that, but as we queued for registration (not an easy task with 120 pairs of runners in a marquee), the heavens really opened, and all the runners that had already registered, headed back to the relative shelter of the tent, making things rather more crowded. 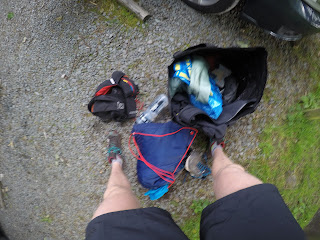 So it was waterproofs on for the start, and unsurprisingly Rob Jebb and Josh Jardine led from the get go. At the end of the first flat section, Chris and I looked over our shoulders and saw a huge gap between us and 4th place and began to wonder if we had gone off a touch fast... it wasn't like we were keeping up with Jebby and Jardine, but we were a lot closer to them than to the guys behind.

Waterproofs came off pretty quickly as we ambled down to Grasmere, and then cruised up the hill towards the tarn and Dollywagon Pike, we took a slightly hybrid line up the Pike - straight followed 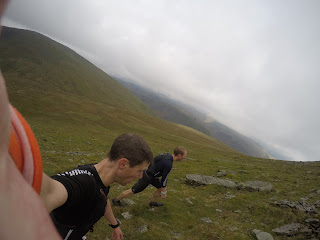 by a diagonal trend, which worked as well as can be expected. (It's one of those eternal questions, which is the best line... straight or diagonal - the answer is, which ever one has the person with the strongest legs). From the top, we ascended into the clag where a bitter wind started to blow, bringing jackets and in my case, gloves, into play. We hit the top of Helvellyn at about 1:40, before bashing across and down to the second checkpoint, staying a little higher than I have done before, so getting a better grassy descent at the bottom. A team with sticks overtook us on the way down, but beyond that, nothing really exciting happened. 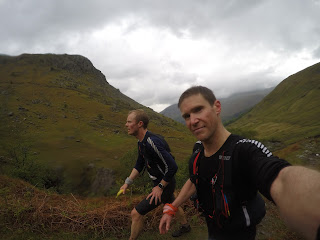 Up Wythburne, we took the line Caity and I took a couple of years ago, avoiding the bog in the bottom - which the guys with sticks ended up in (up to the waist), and after the traverse down to the Styx path, we took a slightly sub-optimal line towards Angle Tarn- where the sticks guys overtook us again.
We got to Angle tarn just as the weather began to break again, and put on the waterproofs on the move as we headed up into even greater murk, leaving the team we had been playing tag with slightly lower down, faffing with waterproofs. 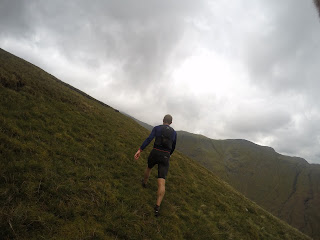 From here on up, the weather deteriorated, I lost feeling in my hands, despite having Prism Mitts on, so getting food in, working compasses and taking photos were all a bit more tricky than normal. As you might expect, food and compass work got priority, so there aren't any pictures of the clag on tops... not that there was much to see there apart from us slipping around on the rocks.

Underfoot it was properly treacherous, so we took it steady over to the top of the Pike. Having not done the direct descent for a couple of years, we were not anywhere near as slick as I would have liked us to be, however, we got down without incident, and once down into Mosedale we began to warm up a little. Not a lot - mind you, there were clumps of frozen hail dotted around the valley floor, and there was no way I was taking my gloves off yet...

A bimble down Mosedale saw us get to Cockley beck for a well earned cup of tea and a sandwich as we turned toward the inevitable looming ascent of Grey Friar. Never an enjoyable climb, it felt like my legs were falling off as we went up. A slightly more youthful team from Howgill Harriers had caught up by now, and we went up and ontowards the Old Man of Coniston pretty much as a 4.
Again, the clag was down across the top. That, along with fatigue and general malaise meant that I was a little careless in my route finding, and we found ourselves dropping a little too low to the East on the way out to the final Top. Easily rectified, but it must have cost us a few minutes, and certainly expended energy that would have been better spent elsewhere.

The other team had better legs than us (perhaps it was finally our rather exuberant speed at the beginning of the race which was getting it's own back), and they went off into the distance ahead of us from the final peak. Unperturbed, we set off in pursuit, though a bit of a lacklustre one, considering that I was beginning to get stitch. Our line down to 3 shire stone was fairly average, the pain from the road descent was as bad as it always is, but finally the sun came out, and I was able to take off my gloves and get a little bit of warmth and feeling back into my hands!
A gel was taken on the way in, just to keep the legs going, and we finally crossed the line in 7 hours and 29 minutes in 4th place. 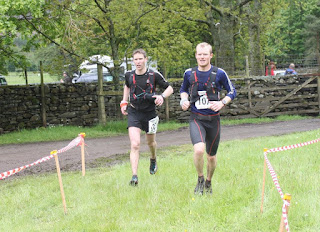 I have to say a massive thanks to achilli ratti for their organisation of the event - it was as good as it always is, and I shall be back next year for the 30th anniversary of the race. 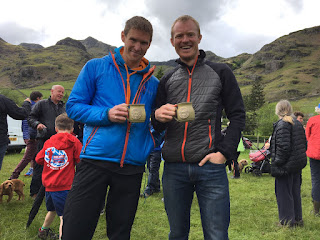 Also, well done to all the competitors, not only those that had a horrendous time in the weather and managed to finish, but also to those that had a horrendous time and took the intelligent decision to bail at various points. Decision making in the mountains can be a hard thing to do, especially when racing - but the fact that everyone got back in more or less one piece indicates that as a whole, the racers made the right calls. 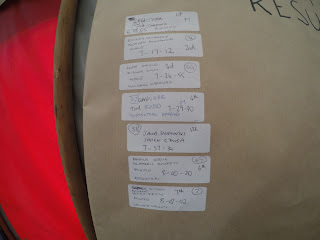