A race that changes character every year. The start/finish area has 3 options, one at the bottom of the hill, one midway up, and the last at the top of the hill. Each year the location is swapped around, for reasons that are not known to me.
This year was the start/finish at the top of the hill, so certainly the most brutal finish of the variations.
Lynne and I got to Wincle ridiculously early and walked around the entire route, which was very useful in determining where all the pinchpoints and stiles were. (and there were a lot of them). If you're Simon Bailey and 3 mins ahead of everyone else it probably doesn't matter, but that isn't me.

I also found that from the off, the field was rutted and dodgy underfoot, so a great chance to get ahead of the pack of road runners for the descent and not get caught behind people for the long run out along the side of the river.
Managed to get a decent start, and got away from people over the rutted fields, was in the top 10 going though the river and then settled into a pace. Overtook Jack Ross, who must have done an ankle as he pulled out injured soon after.
Then it was me and 2 Chorlton runners (soon to be joined by a Dark Peaker) who basically exchanged places for the entire race. I thought we were around the 7/8/9/10th place runners and was going pretty much as hard as I could, but felt there were a couple of gears missing that I couldn't access, especially downhill. That's the problem with focussing on distance and ascent covered, I'm just not training for short, hard races.

It all came to a head at the end, as you'd imagine. Final hill climb and I was pretty far gone. One of the Chorlton lot and the Dark Peaker got a length on the other Chorlton lad and me, and I wasn't going to let the other guy beat me. As it was we came 3/4/5/6th in the race.
5th.
I didn't expect that.
Pretty tired - more so than after the OCT, to be honest, but I guess it's a different type of racing.
And we all got a Trout for our trouble.

Great race, but if you want to do it, the entries open in feb, and it gets sold out in 4 days or so. 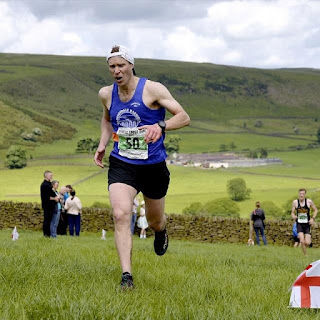