The world of outdoors kit is so awash with new gear that every season we now get inundated with updates of what the latest and greatest gear is. New fabrics, new products, new colour-ways, you name it, everything is out there to make you want to buy new gear.

Gear reviewers get sent new kit to review, and almost without exception, everyone says how wonderful the new kit is. However, these reviews are pretty much all short term reviews. You get an idea of what the bit of gear is like for a guy who has used it for a few weeks... but does any of the gear actually work for a long period of time?
No-one in the industry- it seems- cares what the longevity of a bit of gear is like.... this time next year they'll not only have a brand new bit of gear to push, but they'll have already gone through the half yearly cycle of changing colour-ways, and they'll already be thinking about what new innovations they'll be bringing you in 6, 12 and 18 months time.

Yes, this is indeed the way the industry works, and no, I'm not saying that brands don't totally ignore longevity when designing stuff, I'm simply saying that making things that last forever is not useful for a company that wants to sell you more things.

With this in mind, maybe I should give you some ideas as to my long term testing garments- what has survived, how it performs and what I might end up replacing it with.... (I know there is a minor problem here- and that is some of this stuff is so old that you can't buy it any more- and maybe that is why there are never any long term reviews.... by the time we realise that a bit of gear is awesome and solid, they stop making it).

Salomon foldy-hat thing- One of the best things I've bought in the last year- and the most recent thing on this list is a Salomon race cap. It cost somewhere in the region of 20 quid, which may seem a lot for a cap, however- this one folds up into a pocket... and yet still manages to have a decent brim to keep sun out of your eyes... and in my case- rain off of my glasses. What always used to be a very annoying choice of take a cap but always have to carry it as you have no-where convenient to stow it- or don't take one- is no longer a choice. It's crazy light, folds up to nothing, oh- and gets lost very easily. 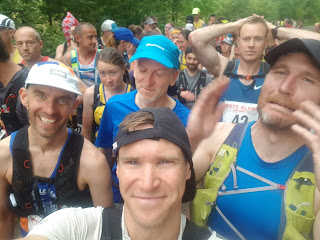 - black helly hansen- I have no idea how long I've had these - easily since 2013. There are 2 of them. They are bog standard helly tops and they get used year round. I wash them. They don't smell. They are brilliant.

OMM Aether smock- This has been my core "main" running waterproof since 2014. I wrote a "first impressions" review then, and having worn it pretty much to death from then, have to say that my initial impressions were borne out. The fabric is excellent, the hood is brilliant, but having the pocket on the inside of the jacket, not the outside, was a stupid thing to do on the part of OMM. Having said that, on subsequent models, the pocket is on the outside. These are getting thin on the ground now, which means that they're either discontinuing them or they have something else up their sleeve. Considering mine has lasted 5 years so far, I'm wondering if I should buy another one, or just keep waterproofing it again...

Berghaus hypersmock - when the original crop of reversible insulated lightweight jackets came out I did a fairly in depth pre-review as to what I thought were the main things to choose from. In the end, it doesn't actually boil down to anything more than packability and ease of getting it on when on a windy hillside. For packability and weight, the berghaus is the lightest and smallest- and also the easiest to get on. I've used it in all seasons since the end of 2015, and it is just about beginning to lose some of its insulative properties.... maybe I need to wash it, or fluff it up a bit... I should probably find out. That being said, it's been brilliant. Lynne uses the Inov8 version... it doesnt pack up quite as small and I find it harder to put on as the fit is quite, um, fitted- but it does the same job.

Montane event pants/ berghaus paclite. My pair are the eVent ones and these have been going since 2014 - the Paclites since 2011. The eVents are a bit heavier and a bit bulkier than Lynnes Paclite trousers, so they tend to get used for the occasional Mountain Rescue callout, and when I need a solid pair of trousers on the hill. They are going fine after, oh, I don't know how many years. I put a hole in them and repaired it- and they just keep going. The Paclites I borrow from Lynne when I need a lightweight pair of trousers for a race where I *might* need to wear them. They are bombproof and comfortable. (when I am fairly sure Im not going to need to wear trousers I just use a pair of 10 quid decathlon waterproof trousers.... Theyre light, but horrible to wear).

-Salomon sense 3-Ive had this since 2016 summer- it has lasted a lot of abuse and is unfortunately just beginning to wear out. That's the problem with lightweight fabrics. It still gets used a fair amount. I like the zippy pockets, I like the big pocket on the back where I stash my waterproof- and the fact that it barely weighs anything at all. I know they don't make this any more, so I don't know what Im going to replace it with when it finally gives up the ghost.

Well- I now use something called veloviewer which means that not only can I see how many kilometres I run in my shoes- but the amount of runs I have done, time run, metres ascended, average times and distances... you name it, I can geek out over it.
So here is my table for the main shoes I have worn. As you can see, I tend to use x-talons and mudclaws because they are the shoes which provide me with decent grip on the moor.


I suppose the thing to see here is that a pair of inov8s lasts me between 30 and 60 runs, depending. I should probably have noted why I retired the shoes- be it lack of grip or destroyed uppers. The Baregrips still had insane amounts of grip left on them, but the uppers were totally trashed. The Fellraisers had no grip to start with, and Im surprised that I did that many miles in them. Most of them were trail, not fell though.

Im toying with the idea of the new graphene inov8s, but by the looks of things, theyre going to need to last me for between 100 and 120 runs and 1400km to be worth it.

- I have to put in a good word for my Mountain Equipment Ultratherm. It's effectively a really comfy fleece with a wind and semi-rainproof cover. No, there is no insulation beyond the fleecy backing, but it is a brilliant bit of kit that I've had for years.  You probably can't buy it any more, but nevermind. If you can get one, get it!


Gloves
Yes- if you've read the blog before you know I have a thing for gloves. Current favourites for warmth are the montane prism mitts. The only problem with them is that after a year or so the insulative properties seem to reduce. I'm on my second pair in 3 years, which isn't great from a longevity point of view. When I got the new ones I was astonished at how much warmer they were than the old pair.
For waterproofness, a pair of Extremities Tuffbags are where it's at. Light. Waterproof (as far as it goes) and very very packable. 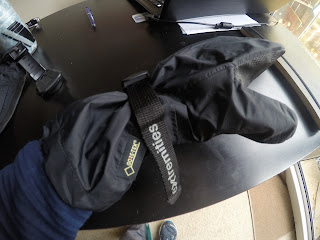 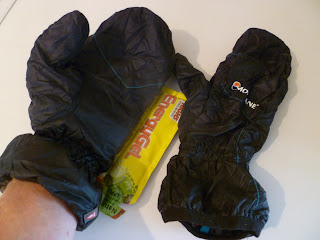 Headtorches are getting ever more ridiculously powerful and longer lasting these days. In some cases it's like running during the day even though the light source is on your head. Yes, I like new gear, but if the thing you are using is working perfectly well, do you really need a new thing? No. I'm currently using a Petzl reacktik+ from a couple of years ago. It works well, survived the night when we did the High Peak Marathon and has a battery which is easily changeable if you run out of charge and need a new one. Its a USB chargable battery, and the torch has enough lumens to make your life easy.  Oh -and its comfortable enough on the forehead... something a lot of people forget until they have to wear it for hours on end.
There are a number of torches on the market that are crazy cheap with insane amounts of lumen output.... I know a number of people who buy them saying "well, it's way cheaper than petzl or hope, when it breaks I'll just buy a new one". Which is exactly the kind of thinking I want to get away from. Cheap and pretty much disposable is NOT the way we should be thinking about gear. 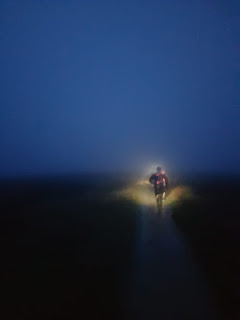 So there you have it. The only thing I have had to replace recently was the shoes and the mitts. Consider all this stuff to be good for fellrunning and general hacking about on the hill. Im sure there are other things I could talk about in terms of long term kit reviews... but that'll come at some other point.
The main thing to be aware of is that yes, there is kit out there that lasts. No, you don't need to go out and buy the latest bit of kit and colourway, and even if your favourite sponsored runner is poncing around in new kit, it doesn't mean that you need it as well. Think about the environment. Think about the energy that goes into creating new things. Be intelligent- get stuff that is going to last.
Posted by zephr at 11:21