Last day of the summer/autumn?

On Saturday a small (and select) group of us went for a little run from Glossop to Chinley. The main point of the exercise was of course to get some miles in our legs, and was nothing to do with the fact there was a beer festival going on in Chinley...

The day was beautiful, the running was fantastic, the visibility was spectacular- we could see right the way across to the welsh hills from Chinley Churn.

And of course, the beer was fantastic. Unfortunately (or maybe fortunately), I didn't actually take any pictures of us at the beer festival, but suffice to say we had a delightful run over, followed by a prolonged session of sitting in the sun, chatting, and sampling some rather fine, and in some cases, very quaffable ale.
A lovely day out for what seems to have been the last of the good weather for a fair while. 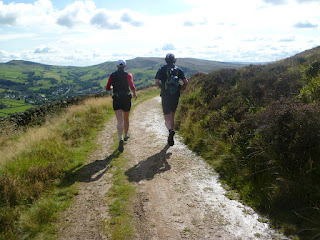 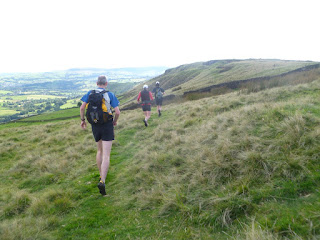 The triple dipper (the tripper)

Today was the 2nd year of the tripper, starting with the Coombs Tor race in the morning, a run across from Rowarth to Padfield and then a run around the Padfield Plumfair Scamper, then a long old wait and the infamous coal sack race up Redgate.

Just as before last weeks race I went out for a bit of a ride with young Mr Dawson, thankfully I was the one choosing the route this time, and I knew the roads didn't run out halfway along. However, it was the route that somewhat beasted me last December where I had to get bailed out by Lynne part way around... This time, though we blasted around snake pass, strines and back over holme moss in little over 3 hours (with a coffee break).
50 miles of not exactly perfect preparation for an 18mile epic, but there you go.

There were a fantastic amount of glossopdaleans out for the Coombs tor race, which is always good to see. Although its quite amusing to get to Rowarth by road everyone managed to get there pretty much on time, though Jack Ross was one of the last to arrive.
There was a good bit of banter as we waited to start, with Sikobe giving out chillies to everyone that was going to attempt the triple.

We were set off with an almighty toot from the starting, um, tooter, and we commenced a mad dash to the bottom of the hill, knowing that there was a pinch point almost straightaway. Phil Swan put in a great burst of speed to be in the top 10 down the hill, and was commenting something about going off too fast.
Well, that's what he thought, and then overtook me up the next hill, going very well indeed. I decided that I'd generally enjoy my day out, thinking that my legs were a bit heavy, and that I wanted to have a bit of energy in my legs for the rest of the day.  Off went Phil, and then James overtook me, and a few others.
It wasn't until a good few miles on, after John Doyle passed me that we ended up catching back up to Phil and James. Julien was suffering in the heat, and he was rapidly falling back, not running comfortably.
Going up past lantern pike, we Phil was beginning to tire, and the running though a big puddle and spooking a load of cowes didn't help either. I finally caught up with him and James on the last ascent. Phil and I hooked down the last descent, following John Doyle and one other guy. We blew the other guy away with about 400metres to go, and I could see Phil was really feeling it, so in the last 50metres I took it into my hands to blast past John, which was nice, coming in 11th overall, 3rd glossopdale in.
Props to Alistaire for coming 2nd- a fantastic result.

The run over was all good fun, and 6 of us stuck pretty close together. We took a slightly different line to last year, but got over to Padfield in good time for the start of the Plum Fair Scamper.

I started out at the back with Andy Oliver and Charlie, thinking that we'd just cruise through the race, not too concerned about blasting it. All of a sudden we were actually pretty much last, being held up at stiles and gates, which was nice to get the rest at that point. I slowly worked my way through some of the back field on the way up the hill. I finally managed to catch up with one of the Jackson clan. Tony was kind enough to give me a couple of sips from his bottle, before I headed off on a very slow chase down of John Doyle. I finally caught him at the peak of the hill, and we ran down the hill together.
Just about held it together to keep John off at the end with a bit of a sprint finish for 31st, which was nice.
Lynne and I decided not to hang around for a further 2 hours for the Coalsack race. My contact lenses were dirty and needed to be taken out, so we wandered back across the fields to glossop.

A few of the original starters from Coombs that ran across and did the scamper stayed until the end to do the race up Redgate, which I believe John Doyle won. (mainly because I wussed out- at least he knows that he can beat me up a hill with a coal sack on his back... useful for when winter comes, I might be calling on your services John).
I'm now pretty damn tired, and will probably stay that way for a while, let's see how things go at Lantern Pike next week. Its on the Saturday so we'll have to think up something to do on Friday night to knacker ourselves out beforehand.

I haven't been out running properly in quite a while. What with being down in London, being knackered and having a few niggles when I got back to Glossop and generally not having the greatest of motivation, I just haven't really been out.

As a matter of fact, I tried running up pretty much half of the ascent of the Shelf Moor fell race last week, and was a bit concerned when I ran out of puff quite low down and had to resort to walking.
In the spirit of amusement in the face of adversity I looked out of the window this morning at what was basically an all enveloping cloud of clag sitting on top of Bleaklow and thought, yeah, I'll just have a bit of a jog around it.

(as preparation, I have to mention I was out on a magical mystery tour on a road bike yesterday, more notable for its rather exciting deviations onto bridleways, across fields and over barbed wire fences rather than the distance we covered. Maybe it was that which woke my legs up - the moral of the story is if you are out on a road bike with someone and they mention that just up ahead the road on google maps runs out, but that it'll probably be fine, be prepared for barbed wire).

My real motivation for running this race was to check that my legs still worked, didn't fall off, and generally that things worked before next weekend... Its the 1st anniversary of the "triple dipper". Getting a quick jog up and down the moor should be enough to let me know how things are going.
There was a relatively strong field out for the race, which is always good to see, even though this weekend has some other very good races on, so I decided to just start at the back and work my way through the field.

Charlie set the race off in fine style, with a, "Right then. Go" which seemed to surprise a couple of people. The front guys raced off, and I wove my way through the field from pretty much the back.

As ever, the hill up to James's Thorn was horrible, and I walked a lot more than I wanted to, the clag on the top was thick enough to cut, and the peat was very peaty. Shame the race route didn't quite take the trig point into account, it curved just short of it, probably for safety as the rocks were very dodgy underfoot. I decided to go around the trig anyway.
The run back across the moor was just fantastic. Bog, peat, groughs, fog, just about able to see where you were going. The flagging of the course was pretty much perfect, and the way to go was very clear indeed.
Coming off the top of Lightside, the fog cleared and there were a good few people cheering us on, so I let my legs go a bit on the descent.

Finished in 20th place in about 56 mins, which I was quite happy with.
Some of the guys from Glossop excelled themselves, Mark Ollerenshaw, Tom Jackson and young Rory all in the top 10.
Well done to all who took part, and thanks muchly to all the marshals who stood around in not the most pleasant of conditions to help speed us on our way, and thanks to Gordon and the Swans for the pictures.