This race was run in memory of a lovely and talented runner and climber, Alan Kirk, who will be sorely missed by the local outdoors community. He passed away last week.

This was to be the beginnings of my come back from injury. I have been off running since mid-June, and re-habbing in various ways, shapes and forms. A sub-10k run around the local area seemed like a nice way to break myself back into the running thing. Not too long so I wouldn't massively overdo the distance, and not so technical that I would end up cronking myself into a rock.
Not only that, but a decent enough distance to assess over the next couple of days how well my recovery is going.

The Scamper was chosen as a local race for the Glossopdale fell champs as well. I need to do 2 more races in order to qualify anyway, and this is the shortest of them all, so it seemed like an intelligent plan to enter.

What a delight it is to enter a local race without all the bells and whistles. Since being injured I have almost closed off in despair at all the "gnarly" and expensive races that are popping up all over the place, promising medals and t-shirts and this that and the other. It was a true delight to pay a fiver, get a number and just go and race in the hills against other people in similar states of raggedy old vests and shorts.

The idea was to go out easy, enjoy the climb, because that generally doesn't hurt at the moment, and then not go too crazy on the downhill, as it seems to be the impact that is the driver for the hip tenderness at the moment.
And then Des told us the race would be run anti-clockwise. Great, so the downhill would be down a hard track, instead of nice, soft bog. Ah well, we'll just have to see how it goes.

From the off I was very much off the front group pace, with Ali Campbell and Si Pymm setting a bit of a level, with Chris Webb close behind. After the first bunch up at the bottle neck I noticed Paul Skuse was also ahead of me, as was Caity.
I mooched along with Dave Soles for a while, trying to make sure any gates that could be opened were opened - 95 people jumping over gates in quick succession doesn't do them much good. By the time we hit the stream crossing I had caught up with Skusey, and overtook him on the jump across, and then tried to stick at about the same distance away from Caity on the climb to Cockhill.

It was going relatively well until Rookie Error of the day - shoelace came undone. Talk about lack of racing - indeed any kind of running experience at all...

By the time I'd sorted it out, I was back with Paul, and we topped out and started the descent together. It was a bit fun underfoot, and eventually I distanced him, and caught Caity in pretty much the last field, holding her off for 10th place at the end.

Hamstrings are a bit shot, as is my left calf, but that's just lack of running practice. At the moment I can feel the hip a bit sore, so I'm off to sit down. The acid test is how/if it recovers/improves over the next few days.

Thanks muchly to Des for the organisation, and the last minute chance of direction. Always nice to have a bit of a change of plan.
I wonder if they'll do that at Jura next year?!

As you may or may not know, the main race I was aiming for this year was the TDS. 110km and 7000m of ascent from Courmayer to Chamonix. Quite an amazing route as far as I could tell. The points needed to gain access to the race came from the Spine Challenger 2016 and the Bryce Canyon 50 mile 2016.
Training started in earnest at the beginning of the year, and I was racking up the miles and ascent nicely, right the way through to June, having got a fairly decent time on the Old County Tops in May. All was going well, until in the first week of June I felt a little ache in my right lower back - just above my bum. Technically - in my Sacro-iliac Joint.

No problem. Ease off and let it heal.
Except the ache turned into pain, and then the next day I could barely put any weight on my right leg as it hurt so much. Oooh. Problem.

The next few weeks were taken as rest weeks - though I was booked to go out to Chamonix to have a look around some of the course where I would be running at night. I managed a day of reccying - about 20km, with a fair amount of pain relief, but the 2nd day, a planned 30km day, which would normally be a doddle - was called off after a mere 2km as I literally couldn’t walk.

2 months out from the race, and this was a bit of a bummer. There was the distinct possibility that I could rehab myself back to walking in time for the race - though 110km might be a bit of a stretch, I would probably be able to stumble my way around within the 33hour cut off. The possibility of running for that distance was not an option. I could barely run 100m, let alone 100km.

As the days and weeks rolled past, more and more people asked me about the hip, how likely I was to run, when I would make a decision etc. The idea was to get out to Chamonix a week before the race and make an informed decision there.
The idea of making an “informed” decision when you are surrounded by a load of psyched people, wall to wall sunshine and amazing scenery did seem a little out of place, though. That was not a situation which was conducive to being intelligent.

Having not run for 4,5,6,7 and finally, 8 weeks, the main thing I wanted to avoid was doing a single event and then destroying myself for the next 3,4,5 etc. months. That would be really silly. Don’t get me wrong, I do enjoy racing, but I would much rather have 5 months pootling around in the hills with friends than doing a single massive blow out in a race which I might not even finish.

And so it came to August. I had not run for 6 weeks, and to be honest, I didn’t fancy just walking the course. Entering it for it’s own sake was not on the agenda. The bullet was bitten and I withdrew my entry.
I’d much rather DNS than DNF.

We went out to Chamonix for the holiday anyway. We walked, we drank beer, I managed to get a short alpine day in with a friend, and we had an amazing time.
Was I annoyed that I wasn’t running the TDS? Yes. A little. However, I know that I still can barely run 5km without pain. Attempting a race of that magnitude would have been folly and stupidity. We’re home now, and the rehab continues. I’m hoping to get out for some shorter races soon, and maybe even dabble a bit in XC this winter. The hip is still not pain-free, but the movement continues. 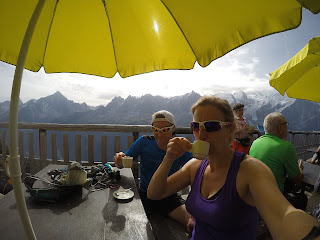 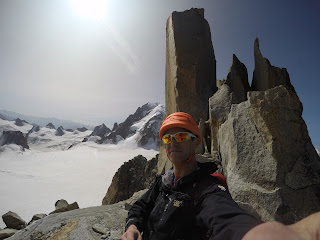 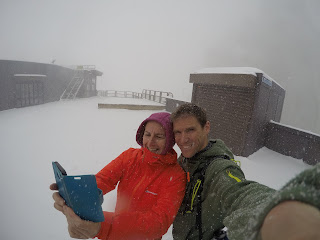 Will I enter the TDS next year? If my points still stand, yes, I think I will. Not because it is unfinished business, but because I can’t see any other time that I will bother getting the entry points. We’ll see what happens.