The original idea for a holiday this year involved France, alpine passes, road bikes and sun. For a number of reasons, this didn't come off, but luckily we had a back up plan.
As mentioned in the previous Spine Blog, I've never actually set foot on the Pennine way anywhere north of Marsden. Thats quite a lot of territory that, if not recced, might prove a little tricky come the actual race.

Lynne and I decided to have a few days run/walking up the Pennine way, basically to see what it was like underfoot and around about from Wessenden (isle of skye road) up to Horton-in-Ribblesdale. I wasn't carrying full on spine kit, but was carrying enough for a 4 day running trip, staying in hostels etc. We both ended up with packs weighing between 4 and 6kg depending on which bits of clothing we were wearing, and whether we'd eaten lunch and drank all our water... 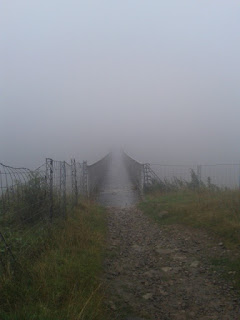 Day 1 from the Isle of Skye road to Mankinholes. As you can tell from the distance, we weren't thrashing away trying to run as fast and as hard as possible, but rather, this was a considered recce of the route, and to get an idea of what was underfoot. The weather on day one was indifferent at best, and wet and misty at worst. 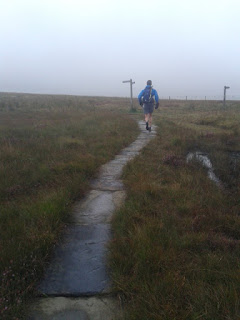 Waterproofs on all day, not really conducive to sitting down for lunch. It was great for checking out the markers, the directional changes, and seeing just how shockingly awful the paving slabs are going to be in January. I try and avoid the slabs on bleaklow over winter because of how icy and unpredictable they can be....
We got into Mankinholes after heading up to Stoodley pike, which I recognised from Shepherds Skyline a couple of years ago. Hung all our bits and bobs up to dry in the drying room if the hostel (which doesn't actually turn on until 5pm) and went to find a pub. 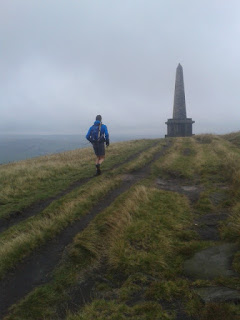 Day 2 Mankinholes to Cowling. The main thing about today was that although there isn't a lot in the way of peaks, there is a fair amount of up and down. Its not exactly on entirely runnable terrain either, so keeping up a decent pace out of Hebden Bridge might be challenging. Need to workout exactly where the checkpoint in HB is going to be, to plan a route in and out, and recce that as well.
Once over the first few lumps, it basically stays lumpy all, and in some places the path becomes much more bog than anywhere else that I've seen thus far on any section (including Bleaklow), and the final drop into Cowling was fun, but quite a long haul. 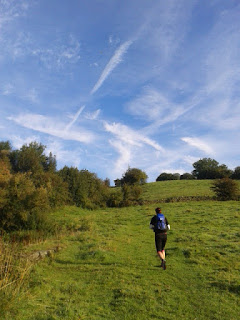 Cowling has rather a decent pub with good beer, good food, a good landlord and is a genuinely good place to have a pint. The B&B also has remarkably comfy beds, and very welcoming hosts.

Day 3 Cowling to Malham. Very much a slightly undulating day, going through lots of fields and farmland. A number of bovine encounters, and a few places where the PW was not altogether well signposted meant that this is really a place that you need to keep your wits about you.

Generally well signposted, though... Much more runnable than yesterday, and a bit less hilliness to worry about. It got a lot flatter toward the end, into Malham. Pub with kittens, and a clean hostel with excellent self catering facilities. 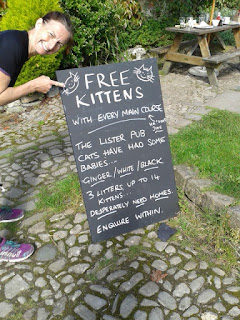 Day 4 Malham to Horton-in-Ribblesdale. Originally this was going to be a day to Hawes, but there was no train station there, so we cut it short. 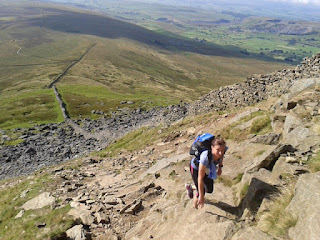 Steep pull out of Malham, a bit where you really don't want to go wrong, easy running to Fountain Fell, ditto to Pen-y-Ghent, and an easy off into town.

Apart from day 1 the weather held off, and we had a decent few days of pleasant autumnal sun. I used the Harveys 1:40k, Lynne had a series of 1:25k laminated sheets that we had printed off before going, and we surprised ourselves by going across them at quite a rate.
I did the entire thing in a pair of Inov8 x-talon 212s, which were slightly battered at the beginning (450k on the clock), and were a little slippy and slidey in some places, but they held up well. I think they might be coming toward the end of their fell running days, and may have to be relegated to trail running soon.
I got everything in an OMM 20litr adventure light, though think that for the race, the 32 litre might be slightly more appropriate, considering the amount of extra gear that we will be required to carry. If i can get it all down to less than 10kg all told, I'll be pretty happy.

The story so far.

As a number of you may or may not know, along with doing a fair amount of fellrunning and a job in physiotherapy, I'm also a member of Glossop Mountain Rescue Team. A group of volunteers who are a part of the Peak District Mountain Rescue Organisation, and Mountain Rescue England and Wales as a national organisation.
In January last year, one of the guys from one of the local teams did the Spine Challenger race, that's the Pennine way from Edale to Hawes, nonstop in January. That's about 108 miles, and is the smaller brother of the Spine race, which is a nonstop continuous race along the entire Pennine way, from Edale to Kirk Yetholm.
This guy apparently had a great idea of potentially running a Mountain Rescue Spine Challenger type race, alongside the actual race, while the teams helped provide safety cover for everyone. He approached the organisers, they loved the idea, and so an invitation was sent out to teams, saying would you like to run one of the longest, coldest and gnarliest races in Britain, and in the meantime, if you can get sponsored for it, that'll go to Mountain rescue as well.
(thats the version of events that I think I heard, it might not be 100% correct, but its what I remember... apologies if its wrong, let me know and I'll amend it).

So being me, I thought, its not everyday you get an invitation like that, I'll put my name in the hat and see if it gets drawn out, there are only limited places.
Its the kind of thing I might get around to, but generally I prefer fell races where the entry fee is little more than a fiver, and you get tea and cake at the end. The Spine Challenger is a slightly different prospect, and harkens back to the days when I used to enter 24hour adventure races with a mate just because it got us out of London.

So today I have found out that my entry has been processed and I am in, along with a couple of other guys from Glossop MRT. No idea about others teams, but I'm sure I'll find out in due course.
At the moment I have a fair amount of experience of slightly longer distance than average, but I'm certainly not what you would call an out and out Ultra distance guy. I also have a few races in the calendar between now and January that need to not only be run, but raced... (fell relays, snowdonia marathon, need to get a decent park run for the club champs etc)  So although I'm going to be concentrating a fair amount on training for the Spine, I need to keep the speed up, hill pace good, and generally, not just long plodding fit...
Added to that, I might know the Pennine way from Edale to Marsden pretty well, having run the Trigger a few times, and generally bashed about hereabouts for 4years, but thats the bit I'm going to be running in the daylight. I don't think I've ever walked any of the Pennine way north of Marsden. This might be an issue I need to rectify.

Other than that, looking at the rather comprehensive kitlist, I think I have most of it, but am still going to see if I can beg or borrow (or, worst case, buy) some specific, and maybe lighter kit for the actual race.

I have no idea if there is anyone interested in this, but I thought I might do a short series of blogs leading up to the race, it is, after all, only 4months away, detailing a bit on training, kit and such like. Even if others don't want to read it, it will serve as an interesting diary to look back on.
Posted by zephr at 14:31 No comments: