Mark recently wondered if I was up for a Kinder Dozen. To be honest, I've been thinking about re-doing it since 2012 when I last did it. It was hot. Very hot- and for some reason I've always found better things to do than try it again. When Mark suggested it, though, there was that inkling that if I said "yes" then I wouldn't be able to wriggle out of it as easily as if I'd simply committed to doing it on my own.
"I'm free on Wednesday". - great- pick up at 7:30 then.

Minor issue- Wednesday was New Years Day. Meh, if nothing else it will be one heck of a hangover cure.

We started from the bottom of Fairbrook Naze, mercifully not hungover and started out on a clockwise tour of Kinder, bottom to top to bottom to top to... you get the idea.
It was a chill, but pleasant day and we soon got to chatting nonsense about this, that and the other.
First up Gateside clough went well, then down to Blackden to the old farm, and then, still chatting away we ascended Blackden Brook.
Natter natter natter.
Got to the top... hang on a sec, aren't we meant to be over there?!

Got out a map- aha. Second ascent and we've already pulled a doozy. Went up the wrong bit of Kinder. Ah well. It's not like we're going to break any records- this is meant to be a long day out, shooting the breeze and generally having a good time with time on our feet.
Some lovely photos presented themselves as we skirted around the Northern edge to where we were meant to be, and then a short ascent to Blackden trig, before the dive off the top, down to the farm below Jubilee cabin - and the climb back up to the Knoll. 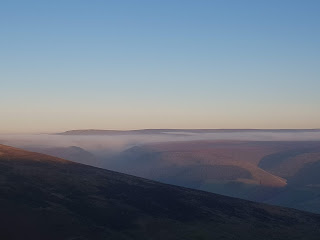 Our lines were fairly random and haphazard as we pootled up and down through the heather. (If you aren't on line, the going can be fairly draining). We ate, we drank, the sun continued to shine and as we made our way around to the South side of Kinder there were more people to say hello to.

Down to the YHA, up to Druids stone and I cut a finger on a particularly vicious piece of bracken- it just wouldn't stop bleeding (my finger, not the bracken)- so a fair amount of blood got transferred onto clothes etc. Thankfully my wardrobe does not consist of "bright white salomon" kit or else the effect might have been- well- spectacular...

Ollerbrook and then up to Ringing Roger- not bothering to take the easy path up- bash through the heather... we're out for a long day, not to make it easy- and then down to Edale at about midday where the hordes were indeed gathering and wandering up the hill.
We wondered if the cafe or a shop might be open, but it was New Years day, so- No. A replenish of water at the campsite and then off up Grindslow Knoll. The wind was getting up, but putting ona waterproof would have been too cumbersome- only to take it off again a short time later- so buff, hat and gloves were deployed for a short time while needed, and then stripped when in the wind-shade.

Up, down, up to Crowden tower and then off to Jacobs ladder where walkers sat eating their packed lunches as we scooped water from the stream, and off up the "ladder". I can only say I was glad I wasn't carrying a bike this time. That has only been the case once, and it won't happen again!
Edale cross and follow the Downfall route to the stile before the delightful ascent to Kinder Low trig which was encased in fog.
Stop to dissuade a group of somewhat lost (and slightly distraght) walkers from walking the Kinder edge path and coming back across the middle of Kinder, and back down through Cluther Rocks - or thereabouts- into the bowl before the long and soul searchingly rough climb up past Mermaids pool to Kinder West trig.
Final bits of food being eaten, and a plunge off the foggy Northern edge (ensuring it wasn't actually a plunge off one of the crags) down to the Ashop, and a short bimble along the trail to get to the old cabin and the bridge before the final- near on concave ascent up to the mushroom stone on top of Fairbrook.
The final Haribo consumed, we toddled off down the hill and got back to the car in about 7:40, well before it got dark.
What a grand day out.