The Dirty Reiver. 200km of gravel roads around Kielder water and the forest. The reason I signed up for it was because it intimidated me. Well, that and Andy Turner was heading up as well, and told me I'd be a wuss if I didn't at least try. It's a challenge. Can I get around? Can my bike get around? No idea. Let's have a go.

Although my training has been building to this since I got my Fairlight Secan in February - through snow, wind, hail, sun, gravel, mud and a whole lot of other stuff, by the time we arrived in Kielder Castle it became clear that I was woefully underprepared as a Gravel rider. I lacked any of the basic accoutrements of a basic Gravel rider.

1- a Beard - or some from of facial hair (preferably waxed if not a beard)
2 - Tattoos. Preferably sleeve, or on a calf. Well on display.
3- Piercings.
4- a hip flask.

However, I do have a gravel bike - and there were quite a few roadies around as well... racing snake types. Maybe I fit into that mold slightly better? Ah well. Putting away my gravel insecurities we wandered around the expo, picked up a hat that was too big, a t-shirt and some tyre levers. And a free beer. We signed on and headed back to the accommodation where we tinkered with bikes for the rest of the evening.

Saturday dawned bright and cold. Frost on windscreen cold. Up at 5:45 and over to the start by 7 ready for the start at 8, by which time it had warmed up to a balmy 0 degrees. I was wearing a warm jacket over the top of my cycling gear- which I decided that I was just going to stash in my bike bag for the duration. The people around me had a massive variety of bag storage sizes and devices from rucksacks to saddlebags to very tiny saddlebags which- (I suppose) probably didn't have the entire amount of "required" kit for the event... but with 1200 riders, there was no one checking and no-one getting checked. Ah well, I'd much rather have enough kit to be prepped for anything that came my way.

Anyway, its a ride, not a race, right?

There was a pre-ride briefing for the people within 5 metres of the speaker at the front - I was about 20 metres down the way with a mass of people behind me, ah well, it would all become clear as we headed around. We set off in a mass at 8am and headed up the hill behind the castle into a 3km untimed/neutralised section - so that we didn't head off like hoons at the beginning. Seemed like a good idea.
Despite being only about 20 metres from the front at the start I there were a huge amount of riders in front of me. Was pretty determined not to go out too fast so took it easy for a while.

The first loop was pretty decent, though my saddle was just a touch too high - causing slightly too much pressure on my bum as we battered through the gravel. Everything else was fine, but I didn't really want to stop to change the height of my saddle... there were loads and loads of other riders stopping with punctures and mechanicals etc. The first station was at 45km where there would be a shimano service station.
The feed station was at the bottom of a bit of a hill so a few people just went straight past it. I saw the service tent and ducked in, got the saddle adjusted (after being quizzed about what torque I needed it done up to... I dunno... just kind of so that it doesn't slip?!). Then off and out up the next hill.

I was trying to be conservative, realising that although the riding might feel easy now, by the time we got to 5,6 and 7 hours in, things would be very different. There was an extraordinary amount of food in my pockets and toptube bag- having run out of food on a previous ride, this was not an experience to be repeated today... but I was just cruising along eating Tangfastics and feeling pretty good. The Handwarmers in my gloves were keeping my fingers just about warm, it was sunny and all was good.


Off up and over Forest Drive with a couple of decent gravelly descents, and pretty soon we had completed the first decent loop. Cross the road and then more rolling hills, with a taste of the headwind to come. It was blowing Easterly all day, but for the time being we were pretty sheltered in the Forest. More haribo saw me through into the second feed station, sponsored by Alpkit at about 95km, just before the split- the 130ers heading back over the dam, and the 200 people going back out on another loop.
By this time, my chain was squeaking quite spectacularly, what with all the dry dust, so I grabbed some chainlube along with some Cheese and Onion crisps and a sarnie. Being oh-so-very aware that you can loose a lot of time just kind of standing around at a feed station- it wasn't exactly like I was waiting for anyone, and I didn't want to seize up, it was time to re-mount and get on out there. 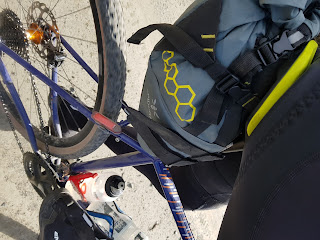 Fairly soon, back on the gravel, the theme of the next couple of hours to the 145km checkpoint became clear. Block headwind.
The conscious thought was pretty much - keep eating. Don't try and just ride and ride - keep eating. I
managed a steady stream of Tangfastics and a couple of flapjack bites through the next few hours as I teamed up with a couple of other guys, taking turns on the front, smashing into a headwind across the gravel. Despite the fact it was one of the hardest sections, it was actually the most enjoyable for me, simply as we were keeping up a pretty decent pace through dint of teamwork, despite being complete strangers.

Approaching the final feed station we split as a group, and I wheeled into 145 solo, stopping for some delicious boiled new potatoes (with cheese!) and a coffee. The best thing to know was that from this point, we were heading west, which meant a tailwind pretty much all the way home... however, there was still 40km to go, a fair few hills and the legs were beginning to tire... as well as having a pretty sore bum.
My hands were fine, though - no fatigue from gravel buzz, the brakes were good, tyres behaving - the chain was still pretty squeaky, but beyond that, the bike was soaking the whole thing up without a problem.

Back to it then. A group had just gone out before me and were about 200m away... I tried to catch them, without luck for pretty much the whole way home. From here to the dam was pretty challenging, if only because it was the section that was mentally challenging... just past a feedzone, and before the final section. Thankfully the tailwind was going well, so time quickly passed.
Over the Dam and we were on the final section. 17km to go - we rejoined the course with the 130 riders. By the time I was there, there was a bit of a moving maze of people to weave through, up and down the hills. By this time I was so comfortable on the gravel that the bike handling was not an issue at all... the worst bit was anticipating quite where they were going to be riding!

By the time I finally hit the Lake shore for the last few km back to the castle the chain was singing like a canary - home as fast as possible in order to be less embarrassed by the noise coming from the bike!
Round the shore and up the final hill to the castle, and a finish in 8:12. Very happy with that, considering I was expecting to be finishing in about 10-11 hours.

A tandori wrap, an alcohol free beer (marketed as a recovery drink?!) and a finishers patch concluded the day. 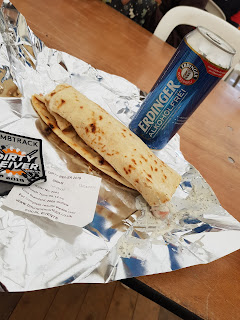 As a bit of a wrap up, I have to say that it was a thoroughly well organised day. Good food stops and endless gravel roads, just as promised. Having spoken to a few people during and after, some people mentioned that it was "a bit monotonous" - which makes me wonder what exactly they were expecting. 200km of gravel is going to be just that - 200km of gravel roads. I loved it as a challenge. It got me out on my bike in the cold and dark winter months, made me more adept at bike handling and made me more self-reliant - not through the event itself, but in the run up to it.

Now to stick some slicks on the bike and enjoy some spring and summer road riding (though I have my eye on the Peak 200 as a bit of a summer amusement if there is anyone up for that)?... maybe it might be time to look at some 650bs for a bit of a wheel change for offroading - but we'll see.

For those who want to know/care - the gear I used was this:
Fairlight Secan with Hope 20Five wheels, running WTB resolute 700x42s. Tubed. - No punctures. (luck? tyres? not weighing 100kg?, I dont know).
GPS- wahoo element bolt
bags - apidura MASSIVE seat bag. Rolled down as far as it would go, and a podsacs top tube bag.
Shimano XC5 shoes with Endura MT500 overshoes.
Normal road cycling stuff.
Gloves that no-one makes anymore... Dynafit bikegloves with inbuilt raincovers. They are AMAZING. Someone please make them again.

and just for good measure, here is the strava file.
Posted by zephr at 18:49